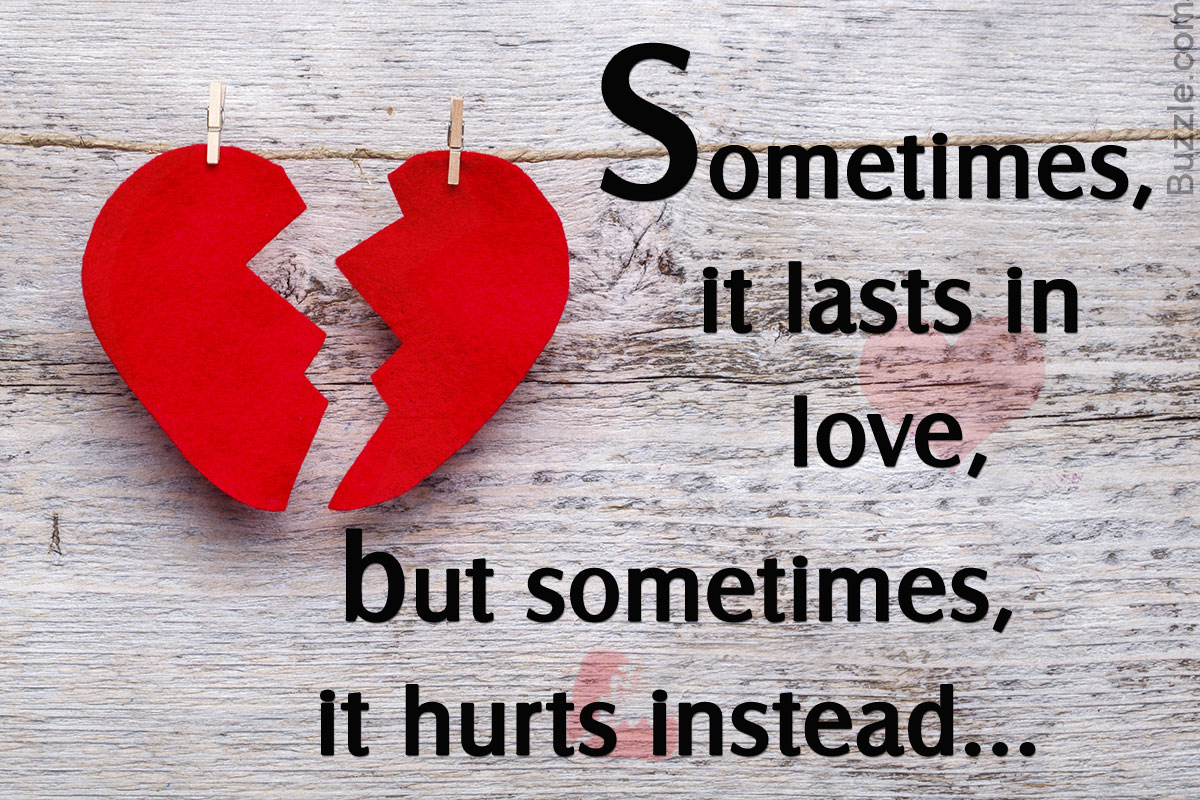 So many people have been heartbroken and are left with the “burden” of trying to pick up the pieces of their lives, which can an extremely daunting task.

Perhaps, you can identify with some of the scenarios listed below:

Some people really care about the person they are in a relationship with but are afraid to share their “true” feelings.  They feel that by doing so they are opening themselves up for hurt “again”.  Let’s face it, no one likes pain.   It’s scary but you must deal with your feelings and emotions because the person you’re in a relationship with may misconstrue your lack of communication as you’re really not that interested and walk right out of your life, and wind up with someone else who is not afraid to be open.  Then, you’re left with a feeling of “regret” because you’re sorry that you were unable to feel free enough or comfortable enough to talk to them because of your past “hurts” kept you from doing so.  You couldn’t tell yourself this wasn’t the person who hurt you.  You couldn’t lower the wall that you built so that you could fully let them in and allow yourself to be free to love again.  Now, the person that you really cared about is gone; they’ve walked right into the open arms of someone else.  Now, you’re left feeling “heartbroken”.  People will hang in there for a bit with the hope that you will eventually let go of your fears; however, they aren’t going to wait forever nor should they.

Have you ever been with someone that you thought was really into you only to discover they were playing games because of their immaturity.  They knew exactly how you felt about them.  Instead of them saying they wanted to date other people and that your relationship with them wasn’t “exclusive”, they said nothing.  They “led” you to “believe” you were the only one.  I believe that’s pretty selfish and it’s never, ever cool to do that to anyone.  It’s not right to play with anyone’s heart just because you feel like you can.  Ask yourself would you want someone to do this to you?

Have you ever been in a relationship with an imposter, an absolute fake?  You thought they were someone they weren’t.  They were absolutely charming and you couldn’t get enough of them.  However, there was another side to them that you were totally unaware of.  The relationship goes south because of the things they did to ruin it, but that wasn’t the worse part.  They told “vicious” lies on you and tried to destroy your character by “proclaiming” to anyone who would listen that you were an awful person by saying that you did things that you’d never dream of doing.  They tried to flip the script because in all actuality they were doing the things they accused you of.  At this point, you’re beyond heartbroken — you’re absolutely devastated.  How could someone you loved so much cause so much pain, devastation, and destruction?

Some of you may sabotage your perfectly good relationship because you’re deathly afraid this is real, so you back off.  You stop taking the person’s calls and find reasons why you can’t spend time with them.  You tell your feelings to go away because you’re absolutely terrified of being hurt again.  You walk out of the relationship leaving the person confused.  You’re hurting, though, because of your decision.  However, what you don’t understand is the other person is as well.  They didn’t get an explanation.  They didn’t get closure.  You just went “ghost” on them.  You allowed your fear to have possibly walked out on something great; this could have been the perfect person for you.  Now, you’ll never know.

Maybe you are in the group of people, who after a break up, just want to be left alone.  You shut down.  You walk through life hoping to be invisible.  You feel like you can’t “trust” yourself to choose the “right” person, so you close your heart.  You meet people who ask you out but you, respectfully, decline every single time.  Then, one day, you decide it’s been long enough, even though you’re still a little skeptical.  You’ve cried a million tears, and have finally gotten over the hurt.  Your heart has been “mended”.  You meet the person of your dreams, but you’re not sure if this is real or not.  Can a person really be that in to you?  Can things really be going that well?  You’re not sure.  The old pain tries to resurface.  Your head and your heart are both reeling.  Which one should you trust — your head or your heart?  Little by little, you let down your defenses as you learn to trust this person, but you’re still waiting for the other shoe to drop.   This is the happiest you’ve been in forever.  This is the point where you become overwhelmed by fear.  Suppose this doesn’t work?  Suppose this person breaks your heart too?  Should you take a step back?  Should you end the relationship before it fizzes out?  Now, you’re anxious.  You can’t enjoy the here and now because you have become so fixated on the fact that this relationship may not work.  You take deep breaths to calm your fears, and eventually get over it.  You realize you can’t be afraid and repeatedly tell yourself this is not your ex.

Sometimes, you’re in a relationship and everyone else around you can see that it’s not a good fit.  They express their feelings and concern; however, you don’t listen to anyone because you’re in “too deep” as the old saying goes “your nose is wide open”.  You ignore their warnings only to discover some time down the road that they were correct.  You ask yourself “How could I have missed the red flags?”  Sometimes, “love really is blind”, but don’t beat yourself up about it.  A lot of us have been there, done that.

There are instances when, after “breaking your heart” and you’ve moved on, the person who caused the “pain” attempts to reenter your life “claiming” they’ve changed and, perhaps, they have.  They “seem” genuinely sorrowful, which leaves you totally confused.  You’ve purged them from your heart and mind, and now they’re back.  Do you tell them to kick rocks or do you take a chance on being hurt again?  Only you can answer that question.  For me, personally, when it’s over, it’s over.  There is no going back because I can’t forget the pain that left indelible scars on my heart.  I wish them well, but it’s just way too late.  Done is done!

Maybe, you’ve never gotten your heart broken, but rather you’ve broken hearts all of your life.  It’s time for you to take responsibility for your actions!  No one deserves to be hurt because of your fear or insecurities regarding love.  They fell in love with you and hoped their feelings would be reciprocated.  Instead, you left them with a big hole in their heart.  If you can’t commit, be upfront with the person you’re dating so they can then determine if this is the relationship for them or not.

If you are asking yourself “What’s wrong with me”, I want you to stop.  You’re wonderful but, sadly, the person who broke your heart didn’t appreciate what they had.

For those of you who are crying yourself to sleep at night, it’s okay.  Cry until you get it all out, and then pick up the pieces of your life bit by bit. 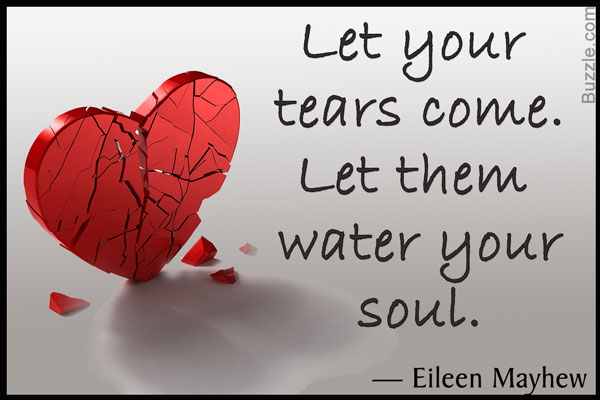 When your heart is broken, it hurts like the dickens.  Trust me, I know.  You feel as though your heart has been broken into a million tiny pieces, and you’ll never be able to put it back together.  You’ve got to allow yourself time to heal.  Take back the power that you’ve given to the one you loved.  Get back in the driver seat of your life.  Let the healing begin.  Get a good support system who will be there to hold you up, and to catch you when you fall.  You are much stronger than you could imagine.  You got this!

A few more quotes about love:

We must be willing to let go of the life we have planned, so as to have the life that is waiting for us. – Joseph Campbell

When one door closes, another opens; but we often look so long and so regretfully upon the closed door that we do not see the one which has opened for us. – Alexander Graham Bell

Giving up doesn’t always mean you are weak; sometimes it means that you are strong enough to let go. – Anonymous

Numbing the pain for a while will make it worse when you finally feel it. – J. K. Rowlin