Most of the time when you hear the term “mama’s boy”, it is not referred to in a positive manner.  “Mama’s boys” have been called everything under the sun.  In fact some of your friends may have said to you, “Girl, I wouldn’t marry him because he ain’t nothing but a “mama’s boy”.  You’re never going to have him to yourself because you’re always going to have to share him with his mama“.  Some of you may have eventually listened to your “friends” and broke it off only to regret it later when you see that he has moved on and has made someone else happy.  Alas, it is way too late.  You find yourself alone, again, perhaps, with that same group of friends who told you to kick him to the curb because they have no one.

My opinion of a “mama’s boy” is a son who is very caring, and loving of his mother.  Perhaps, he was raised in a single family home and for whatever reason, his dad wasn’t involved.  He had no one else to look up to as a role model, and watched as his mom worked and took care of her family, singlehandedly.  He admired her for all of the hard work she put in, oftentimes denying her own happiness, desires, and wishes to see the smiles on her children’s faces.  He may have even been raised in a family where the dad was present, but didn’t get what he needed from his father or maybe, he and his mom shared an extra bond.

A mother will talk to her son about life, and give him wisdom on how he should treat women.  When my son was very young, I taught him how to hold the door for his sisters and I (my oldest daughter didn’t understand it at the time, and didn’t want him doing it; however, I explained to her that some day she would appreciate it).  I instilled in him the fact that he should respect women, walking behind them and not in front of, and not to ever put his hands on them or else…

My son and I share a very different relationship than my daughters and I do — in part due to the fact that we both have the same interests, and love doing different and “crazy” things (okay, fun things.  LOL).  We discuss a very wide range of topics.  Some of the things he tells me, I want to say TMI (too much information, LOL!); however, I’m glad he feels extremely comfortable letting me into his world/life and being able to discuss things that are on his mind.  There are some nights that he sits in the middle of my bedroom floor just talking.  I have to “gently” remind him, sometimes, to give me the short version because he likes to take the long route to get to the gut of the story.  LOL!  He even encourages his circle of friends to talk to me, which, to me, says a lot.  He is extremely protective of me and my feelings, especially when he thinks, as he calls it, I’m being a pushover; those are the days that I have to talk him down.  There are also those moments when he pushes the envelope a little too far and takes me over the edge, and that’s when I have to remind him that I’m a writer and am very creative in my thinking.  Trust me, when I tell you, that he understands what that means completely.  LOL!

Some “mama’s boys” grow up looking for a woman just like “mom”.  Is there anything wrong with that?  Personally, I don’t believe it is.  He marries this woman, and loves her to no end, but still spends time with his mother and calls her regularly.  Again, I don’t see anything wrong with that.  As long as he is spending more time with his wife than his mother, I don’t see where there should be a problem — that is, unless his mom has health issues.  If that’s the case, the wife needs to be understanding and supportive because, after all, you only get one mother.  I would view the him very differently if he wasn’t there for his mother.

If his mother lives alone and has no spouse, I think he should spend time with her, maybe even take her out to lunch or dinner regularly.  However, she may decline because she doesn’t want to infringe upon his time.

Now having said all of this, the wife needs to be “made” to feel comfortable, so that she doesn’t feel the need to compete or become resentful or angry or bitter; there has to be that balance.  If the wife is constantly fighting with his desire to “love” his mother, just know there will be issues in their relationship because a son will always love his “mama”, as she will him.  For those of you who are giving these men a bad name, please stop.

Are some “mama’s boys” extreme in their behaviors towards their mothers?  Possibly.  If you’re in a relationship with a so-called “mama’s boy”, you two need to work on balance and boundaries.  If it works for you, don’t worry about what anyone else has to say about it.  Do you!  How they treat their mothers is often how they will treat you.  Now, keep in mind, there are exceptions to every rule, so if he treats his mother like a queen and doesn’t treat you the same way, well…

Mothers, no matter how old your sons are, they will always need you, and it’s perfectly okay. 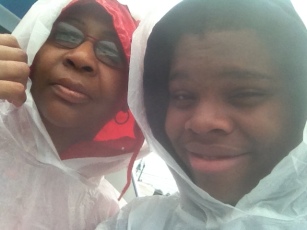