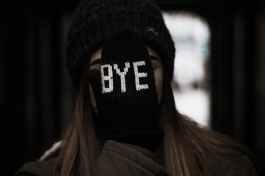 One of the many reasons for my “depressed state” was because I “felt” unloved.  I actually thought that if I were gone, no one would miss me due to the fact that I believed I played an extremely insignificant part in anyone’s life.  Pretty sad, huh?  I know.  I know.  Feelings can really mess you up because that wasn’t the case at all.  There were people who did love me; unfortunately, as I became older, I was too busy focusing on those who didn’t “show” me the love, which nearly destroyed me.

When I was eighteen years old, I once overheard one relative say to another relative “I don’t know what he sees in her (meaning my boyfriend at that time).  She was never attractive”.  In comes that saying, “Every shut-eye ain’t sleep”.  They thought I was sleeping, so they “dissed” me.  I don’t know if the ex-boyfriend heard the conversation because I never asked him.  Can you imagine how devastated I was?  These were people who I loved and cared for.  We were family, so I’m sure I must have had some of the same features as them.  How could they say something so cruel?  Did they actually think that about me?  Years later, I approached one of them about it, and was told it never happened.  I must have imagined it, right?  Wow!  Really?

What they didn’t know was that I was already struggling with my self-worth.  I didn’t like one single thing about me.  I thought I was ugly, skinny as a rail (couldn’t gain weight no matter how much food I consumed), my hair refused to grow like my friend’s, etc.  The list could go on, but I’ll stop here.

My life spun out of control to the point that I was looking for love in all the “wrong” places.  Thus, I made poor choices just to be loved by anyone.

God placed people in my life who would “attempt” to encourage and uplift me, but I was too far gone then, and couldn’t accept it.  However, today, I am grateful because I can walk in confidence with my head held high.  I no longer feel that I’m less than, and I absolutely “refuse” to accept people’s negative views about me — no matter what!

Don’t let people’s “opposing” thoughts or views of you matter; I don’t care who they are.  Don’t let them trample and trod all over you and your emotions.  Stop walking around with your head bowed down to the ground in an effort to make yourself invisible to the world because of “them”.  Take your power back.  Say “Excuse me”, as you “snatch” it right out of their hands.  What I have learned is that people feel inadequate about themselves and are often insecure, so they “pick” on other people, to make them “seem” superior.

You are victorious!  You are a Queen!  Walk in your “royalty”.

One thought on “Feeling Unloved…”