COMMUNICATE:   To convey knowledge of or information about : make known communicate a story; to reveal by clear signs; to cause or pass from one another.  To transmit information, thought or feeling so that it is satisfactorily received or understood by two sides failing to communicate with each other. 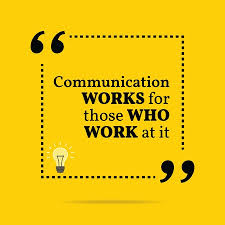 I cannot express just how vital communication is.  Recently, I almost lost the relationship that I had with one of my best friends.  We were communicating via text message, and I thought they were saying one thing and I responded the way I understood the comment.  Needless to say, I misunderstood their message and took the entire conversation out of context.  They, in turn, took my message out of context as well.  A couple of days went by and I couldn’t stand the silence any longer, so I reached out to them not knowing if they would be willing to communicate with me or not.  They did, and things were ironed out.  Sometimes, you just have to use the traditional method of talking face to face.  I’m all for technology, but there are times when you have to go old school.

Communication doesn’t just exist between a husband and wife or boyfriend and girlfriend or friends, but it exists in every facet of our lives.  We use the art of communication daily no matter the relationship (children, coworkers, etc.). 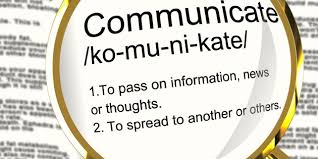 Can you read my mind?  Absolutely not!  How many times have we gotten upset with someone when they didn’t do something we desired of them, but we never communicated our requests with them to in the first place.  Perhaps, we figured our thoughts were being transmitted telepathically.  Really?  The poor unsuspecting person had no idea why you were so ticked off with them as they scratched their heads in the wonder of it all, which is totally unfair to them.

Sometimes, you are attempting to communicate; however, it is very apparent that the other party is either distracted or clearly not interested in anything you have to say.  When my sister and I were growing up, it seemed like whenever I opened a book to read, she wanted to communicate about one thing or another.  Because I loved to read, I really wasn’t listening.  I figured out a way to say, “Uh, huh” at the right time; however, she caught on that I wasn’t really listening and would quiz me on what she had said by asking me to repeat it.  Of course, I was unable to do so.  It hurt her feelings, so I learned to listen and communicate with her.

Have you ever met someone that it’s virtually impossible to communicate with because they misconstrue everything you say?  Now, that’s a topic that I could write a book about.  There was someone that I couldn’t communicate with to save my life.  We’d start off talking, and then it would inevitably turn into a full blown argument.  Why, you may ask?  They didn’t really hear what I was saying, but rather made it about them and didn’t really care about my thoughts or feelings.  Of course, that didn’t fly with me; therefore, we didn’t have much of anything that we could communicate with one another.

Some people like to communicate when they are angry.  Let me just tell you, if you haven’t already figured it out, that’s not the right time because things are often said in the heat of the moment that you can’t take back.  Feelings are hurt and, even though you apologize, the wound is there.  I’m the type that needs to walk away to cool down if things really get out of whack.  You have to know yourself and what you can or cannot handle.  It’s okay to excuse yourself and say, “Can we discuss this later because right now I’m pretty angry and I need to calm down and process?”.  Now, the person may be willing to do that or they may just be determined to continue down the path where no one wins or hears each other.  I remember the time when I first realized that I needed to walk away from an argument, so that things didn’t get ugly.  The person followed me into the next room before I had a chance to get it together.  Unfortunately, it didn’t work out too well because I was extremely angry and all sorts of words spewed out of my mouth.  What I said was true; however, I would have been able to effectively communicate my true feelings a lot better in a much calmer fashion had I been given the opportunity to cool off.

There was a time in my life that I didn’t think I had a voice, so there was very little communication from me — part of it was due to the fact that I was extremely shy.  Now, I talk ALL OF THE TIME.  One of my friends calls me “Chatty Kathy”.  One of my other friends tells me to get to the point when she is limited for time.  Other people probably say to themselves, “Here she comes.  Let’s head in the opposite direction”.  My kids tell me that I “repeat myself.”  I had one of my friends laughing when I told them about an incident where a man used to say, “You can’t tell it all”.  They told me when I get wound up from this point on, that’s the phrase they were going to use.  LOL!  Sometimes, we can communicate too much and people tune us out because all they hear is blah, blah blah.  You have to pay attention to the signs and learn when to end the conversation without driving the other party insane.  Okay, I’m still learning this technique.  LOL!

Whether you have a little or a lot to say, please use your voice — communicate.  Don’t walk around with your thoughts and feelings bottled up inside of you.  That’s one of the worse things you can do.  You deserve to be heard.  Again, don’t overdo it.  It is okay to save some for the next time.

Lastly, communication is a two way street.  If you communicate your feelings, allow the other person to communicate theirs as well.  Don’t just be a talker, but also a listener.  Remember, that it’s not just about you and what you think or feel, but about the other person too.   I can’t tell you how crucial that is in any type of relationship.  Oh, and, one other thing — communication is not a shouting match.  If everyone is screaming at the top of their lungs, no one is being heard.

You have a voice

Don’t let it get lost

“Learn” to express yourself

You’ll feel like a weight has been lifted off

Because that is not the right time

No matter what, always remember #GurlYouGotItGoinOn